What's Changed with Graphs in 6.1? Print

With the release of Understand 6.1, graphs have been revamped to be more useful, readable, and configurable than ever. So what exactly has changed?

Similar graphs are now grouped together for a cleaner and more user-friendly interface. Let's go over an example to demonstrate. Here is a list of "Calls" graphs, and other graphs that involve calls, in Understand: 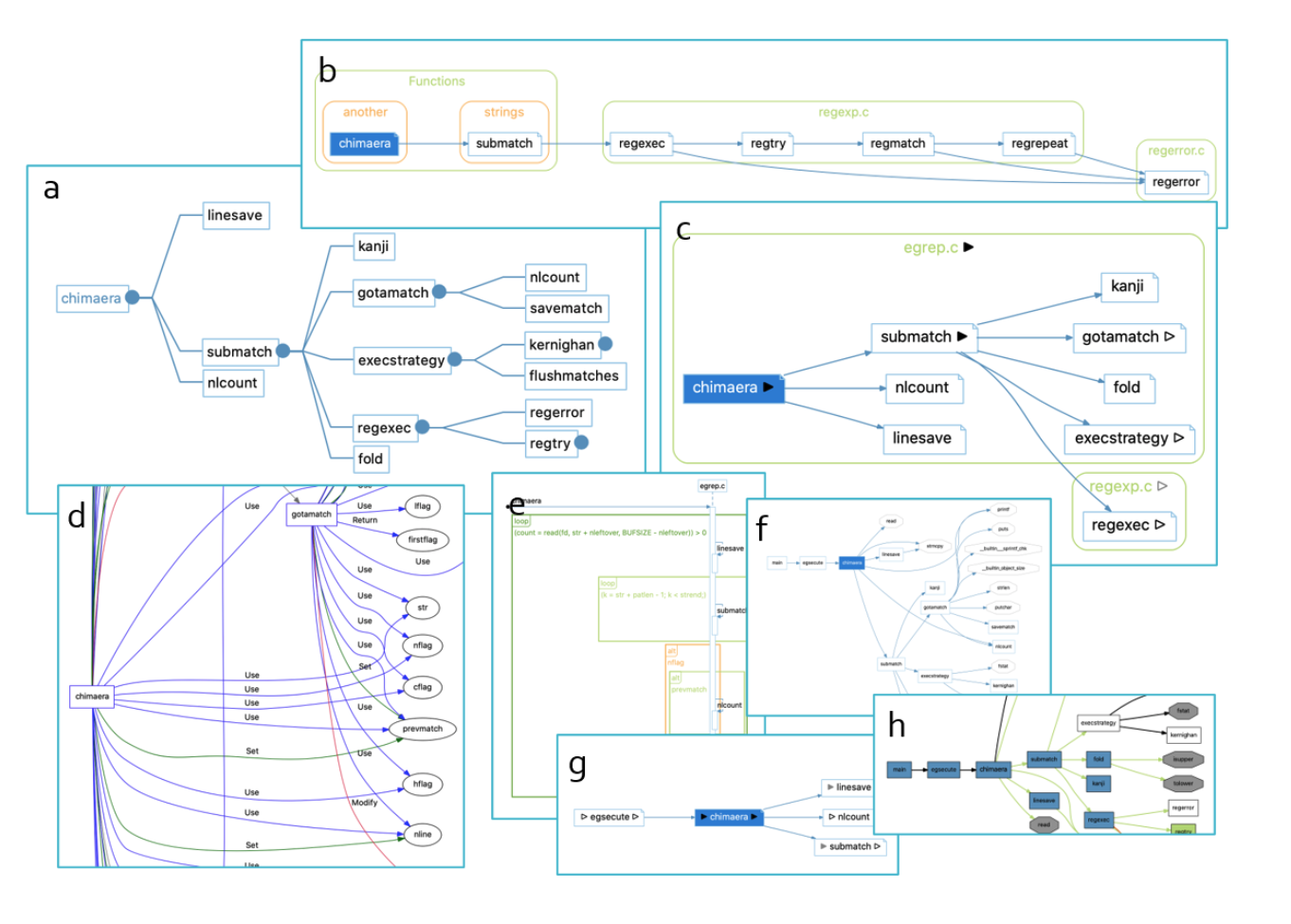 We've grouped these "Calls" graphs together, and are instead offering variants that you can easily switch between.

Here is an example of the old Graphical Views menu option showing all possible graph variants: 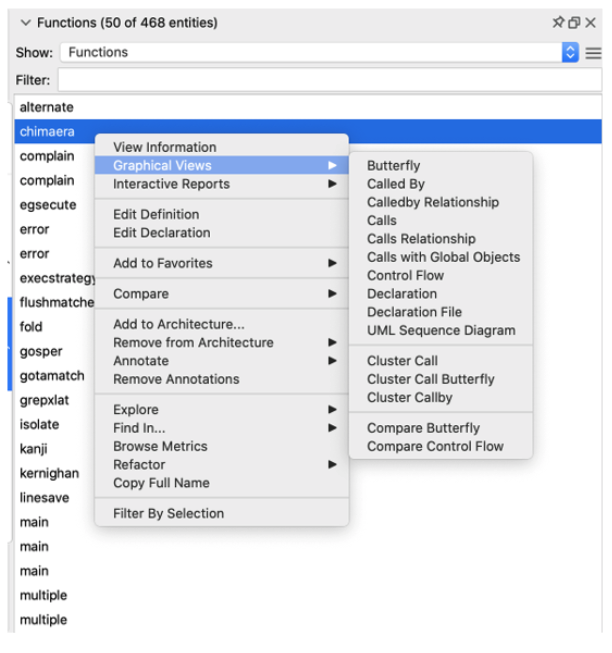 And here is the new Graphical Views menu option showing possible relationships, along with the Graph Window that will allow you to choose a particular variant: 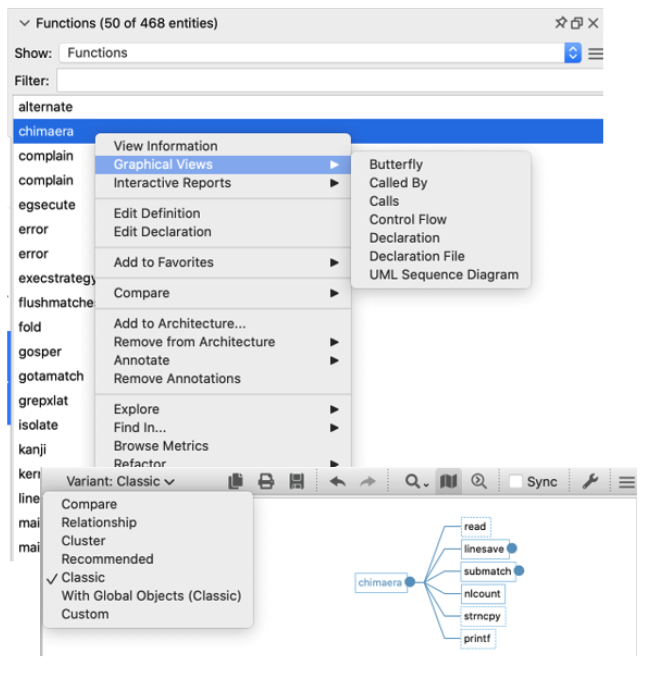 No, the new toolbar isn't missing any options - it's just more customizable! Note that starred (*) options are only available for certain graph variants. 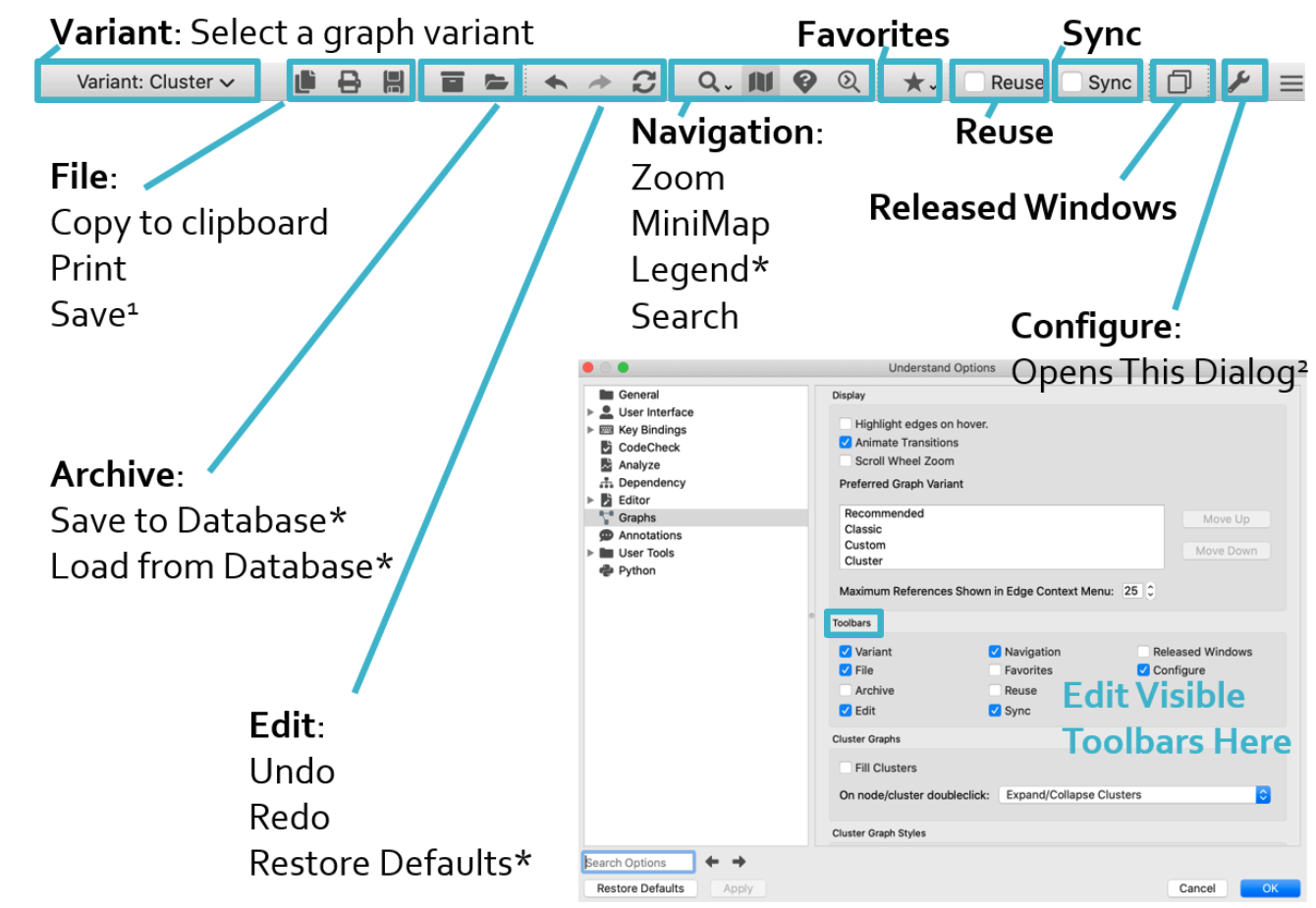 2. Dialog can also be opened from Tools->Options menu (Windows) or Understand->Preferences (Mac).

For the Calls graph, some variants are mappings from previous graphs, but there are two new variants as well:

Recommended (a) and Compare (b).

And, ALL tree graphs (except dependency graphs) have the same variants, adding lots of new graphs to your arsenal! 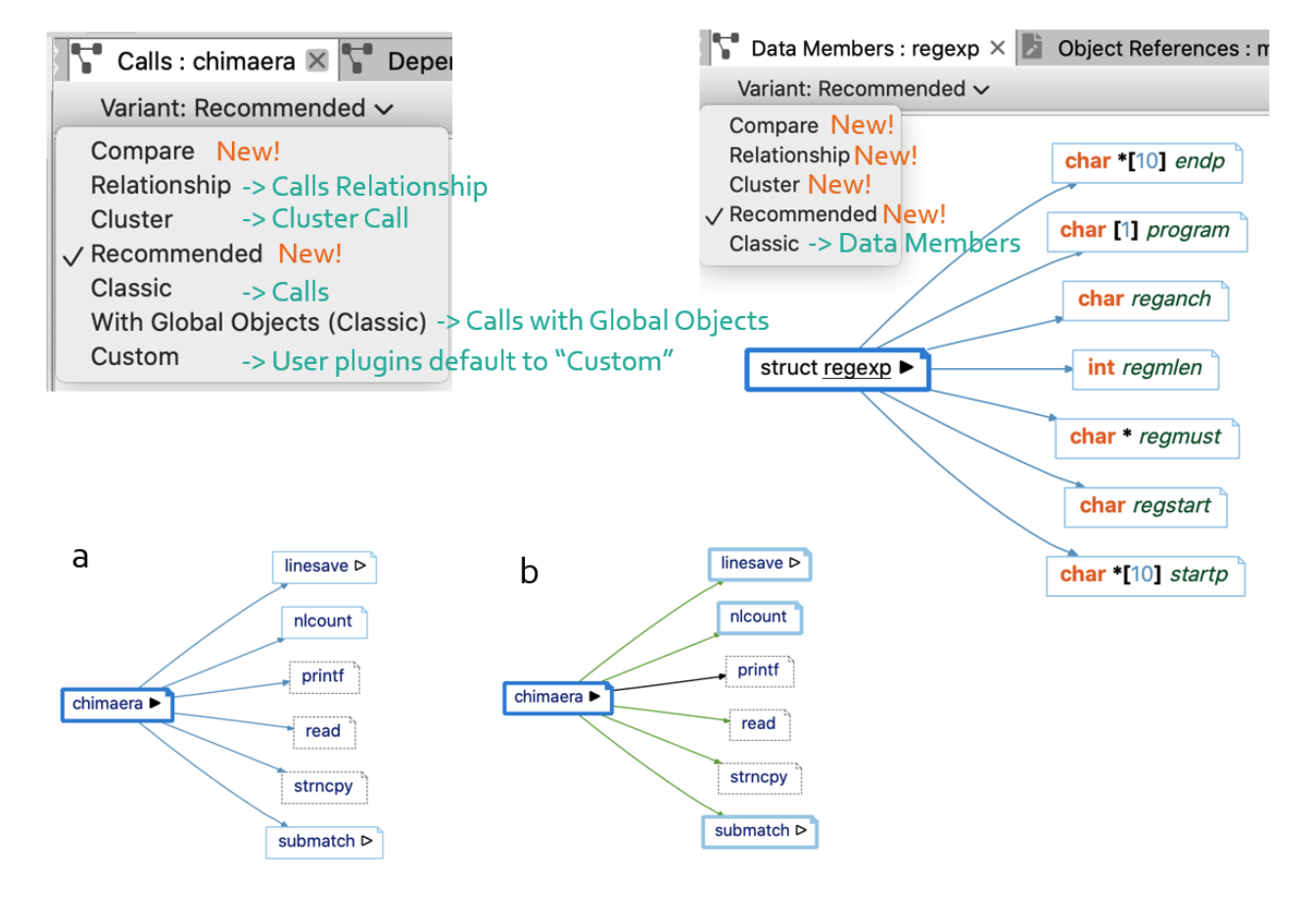 Pick between Butterfly relationships when multiple exist (the sample graph is from the AdaCore VSS project). 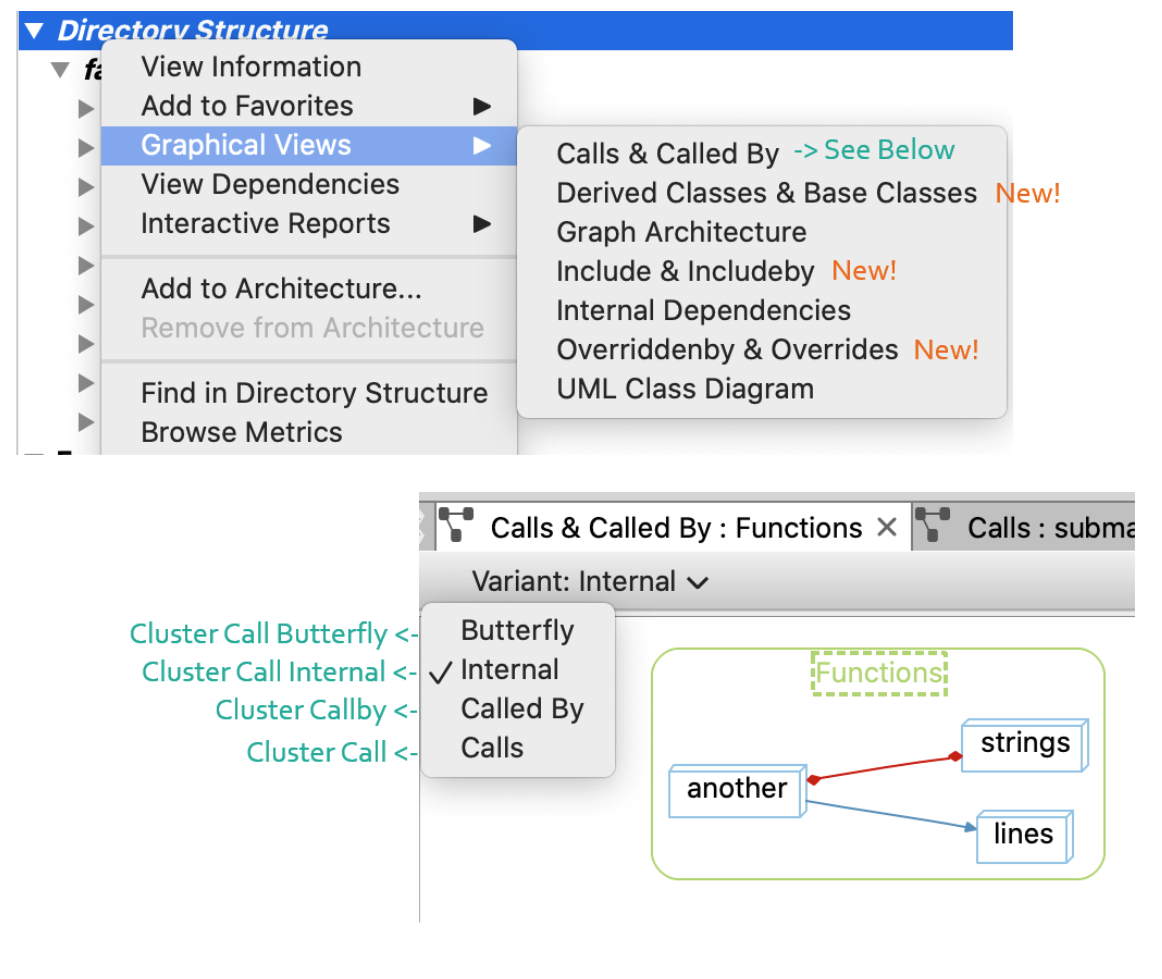 You may have noticed some style changes in graphs if you've been using them for a while. For example, the root node used to be filled, and now it only has an outline. Why? Because there are new text options! 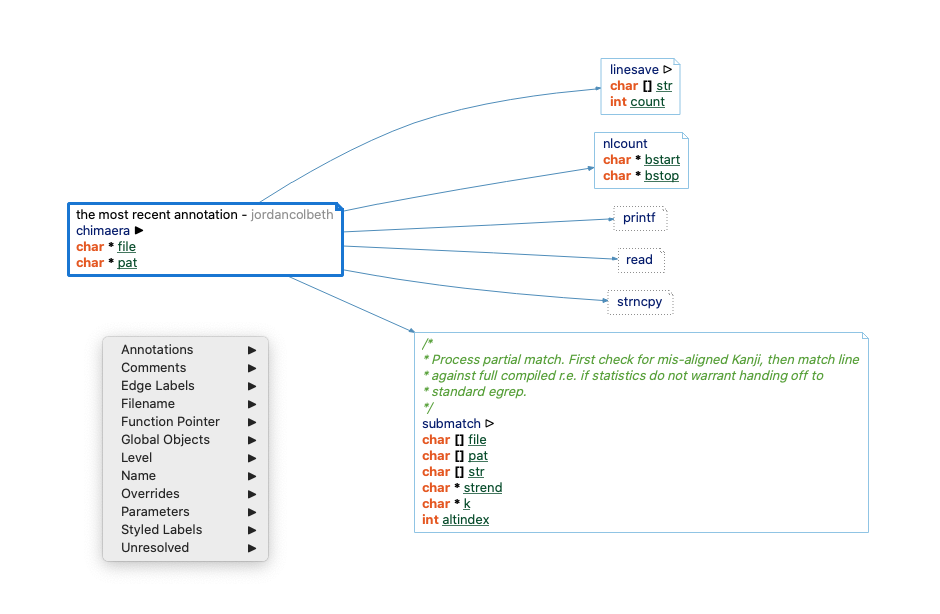 You can now show/hide many useful things in your graph from the context menu. Some examples include:

Many graph variants now support styled labels that use the editor styles to color text (styled labels are not available from graphs exported from the API).

Have you ever opened a graph, tried to scroll, and accidentally zoomed instead? This was previously only fixable by going to the zoom menu and setting the zoom back to 100%. Then, you'd have to open Graph Configuration and turn off "Scroll Wheel Zoom" (Yes, that's an option. Hold down Ctrl to temporarily switch modes).

Now, zoom is undo-able. But it doesn't stop there - here are some more things that are undo-able:

You can now navigate your graph using the mini-map. Simply click, or click and drag, to update the viewport.

To move the mini-map itself, hold down Ctrl (or Command on Mac), then click and drag.

With these new updates to Graphs in 6.1, we encourage you to go play around with them yourself! Let us know how your team is using Graphs, and any feedback you may have, by sending us an email at support@scitools.com!

Note: Attached is a link to a Powerpoint that covers these changes.